Skip to content
14 September 2017
– paper on force fluctuations experienced by a wall in a granular lid-driven cavity flow, with François Kneib et al, accepted to Physical Review E.
4 February 2017
– paper on a new general relation for jumps formed in both hydraulic and dry granular flows, with Ségolène Méjean (PhD student) and Itai Einav (Univ. Sydney), accepted to Journal of Fluid Mechanics.
24 Oct. to 5 Nov. 2016
Was a visiting academic at the School of Civil Engineering, The University of Sydney
– Participated to the Advancing Experimental Geomechanics (AEG) Workshop, held in Pokolbin, NSW, Australia: see more detail here
– Gave an invited talk on jumps formed in free-surface granular flows down inclines, focusing on the back and forth between depth-averaged theory and (lab. and numerical) experiments

25 August 2016
Gave a talk at the 24th International Congress of Theoretical and Applied Mechanics, held in Montréal, Canada, from 21 to 26 August 2016. Was a great occasion to meet ‘big names’ in the field of Granular Physics, and to present them our experimental and theoretical work on both granular and hydraulic jumps, conducted with Itai Einav, Ségolène Méjean (PhD student at UGA/USyd), Edward Wyburn (PhD student at USyd) and Philippa Childs (former undergraduate student at USyd). 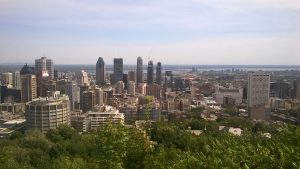 1st October 2015
Ségolène Méjean started her PhD research on granular jumps down inclines: details of the project are available here. This PhD project is funded by Tec21 (ANR LabEx) and is co-supervised by my colleague Itai EINAV at the University of Sydney. This cotutelle PhD thesis is a direct outcome from our collaboration within the GRAINPACT Project

28-30 September 2015
Fourth Conference on Particle-Based Methods (PARTICLES 2015), Barcelona (Spain)
– gave a talk on the different types of granular jumps observed in flows down inclines at the session “From Discrete Particles to Continuum Models of Granular Mechanics: Rapid Granular Flows” (Invited Session organized by Joe Goddard and Thomas Weinhart)
– François Kneib gave a talk as well on force fluctuations experienced by lid-driven cavity granular flows at the session “Molecular Dynamics (MD) and Discrete Element Method (DEM)”
– was a great opportunity to listen to many recent developments in the fields of granular materials, and to meet a lot of international colleagues
27 August 2015
– gave a talk on granular jumps at the French Congress in Mechanics, Lyon. François Kneib gave a talk as well on forces experienced by lid-driven cavity granular flows.
– the session S3 “Ingénierie environnementale” convened by Mohamed Naaim was a really great success!
16 July 2015
– paper on the force experienced by a wall subject to granular lid-driven flows, with our PhD student Francois Kneib and Frédéric Dufour and Mohamed Naaim, accepted to Computational Particle Mechanics.
14 July 2015
– paper on standing jumps in shallow flows of granular materials down a smooth incline, with my colleague Itai and our students Philippa and Edwards, accepted to Physics of Fluids.

5 May 2015
– Seminar (“séminaire café”) at Irstea Grenoble on “standing jumps in granular flows down inclines”, was a great opportunity to talk about some of the research done at the School of Civil Engineering, Sydney, with my colleague Itai and our students (Pippa, Ed, Luiza).

16 April 2015
– gave a 10 min talk on some results of the GRAINPACT project, as introduction to the PICO session on snow avalanches dynamics at EGU in Vienna, Austria: more detail here . 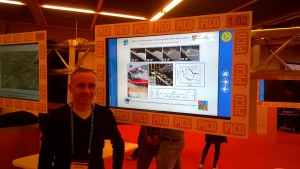 – PhD offer on “granular jumps down inclines” at Irstea / Univ. Grenoble-Alpes (France) in partnership with the University of Sydney, Australia (funded by Tec21): more details can be found here

13 March 2015
– paper on the snow avalanche test-site at Lautaret pass (France) accepted in Cold Regions Science and Technology.
11 March 2015
– paper on overall analysis of data from existing literature on the force experienced by extended objects in granular flows accepted in European Physical Journal E.
8 March 2015
– Back to Grenoble after two years in Australia!
5 March 2015
– PhD project on “Jumps in granular flows down inclines” accepted for full funding by the LabEx Tec21.
21 January 2015
– Test number 200 on the granular chute done with Luiza and Ed !
16-26 January 2015
– Visit of Ken Kamrin from MIT (http://web.mit.edu/kkamrin/www/). Had very stimulating discussions with Ken on our tests recently conducted on our granular chute with the high-speed camera (10 000 fps) to possibly predict theoretically our velocity profiles measured at the base, free-surface and side walls of the chute.
9-12 December 2014
23rd Australasian Conference on the Mechanics of Structures and Materials, Byron Bay (Australia)
– joined the conference with many colleagues from the School of Civil Engineering and François Kneib (PhD student / PhD thesis co-funded by Irstea and Tec21)
– presented our work (laboratory & theory) on granular jumps formed down inclines
– François presented our work (discrete element simulations) on the force experienced by lid-driven cavity granular flows
16-24 November 2014
– Visit of Nico Gray from the University of Manchester, UK (http://www.maths.manchester.ac.uk/~ngray/). Could show some tests on our steady jumps formed down the granular chute to Nico. Itai and I had very stimulating discussions with Nico on the physis of granular jumps.
5 November 2014
– Itai in the headlines at Uni: Tiny grains – big win
31 October 2014
– Research Conversazione 2014 at the School of Civil Engineering: presentation of undergraduate students posters. Pippa and Ed presented their poster on our tests on granular shocks.

Todd Budrodeen and the newly established granular chute which is ready to go!
28 March 2014
– Guest lecture on “Snow Avalanches: Background, Modelling, Protection” to undergraduate students at the School of Civil Engineering, The University of Sydney, as part of the “Fluid Mechanics” course (invited by Dr. Steve Cochard).
1st March 2014
– Start up of the GRAINPACT project